Psoriasis is a chronic, hereditary, noncontagious skin disorder characterized by scaling and inflammation that can develop on virtually any part of the body, even the nails and scalp. There are five main types of psoriasis (plaque, pustular, erythrodermic, guttate or inverse) with varying symptoms and levels of severity ranging from mild to severe. The level of severity is determined by the amount of coverage of the patient’s body and how it affects their quality of life (QoL). A dermatologist can help you determine what type of psoriasis you have.

Psoriasis is a skin disorder that is closely linked to the immune system. The immune systems T-cells main purpose is to fight off infection, but a malfunction of the immune system can cause the T-cells to react differently inciting the skin to produce skin cells too rapidly. In unaffected skin the normal cycle of skin cell production runs on a 28 to 30 day cycle. Skin affected by psoriasis produces new skin cells every 6 to 8 days thus not allowing enough time for the older cells to dry up and slough off naturally. This is where the formation of painful plaques begins. Researchers have found that many people who have psoriatic symptoms come from a family history of psoriasis. Inheritance seems to play a large role in the development of the disease. People with psoriasis may notice that they experience periods when the condition is worse and then it improves. The skins reactions many times are tempered by changes in stress, climate, or infection. Also, there are certain medications that may aggravate the condition. 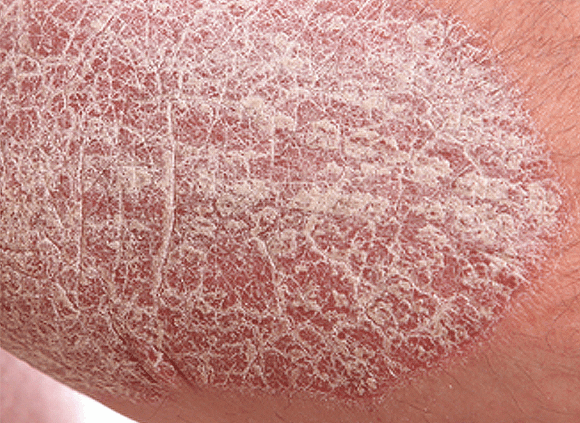 How is psoriasis diagnosed?

Occasionally, doctors may find it difficult to diagnose psoriasis, because it often looks like other skin diseases. It may be necessary to confirm a diagnosis by examining a small skin sample under a microscope.

There are five types of psoriasis. Each has its own unique signs (what is seen) and symptoms (what is felt by the person).

About 80% of people living with psoriasis have plaque psoriasis, which also is called “psoriasis vulgaris.” “Vulgaris” means “common.”

How to recognize plaque psoriasis:

About 10% of people who get psoriasis develop guttate psoriasis, making this the second most common type. Guttate psoriasis most frequently develops in children and young adults who have a history of streptococcal (strep) infections. A mild case of guttate psoriasis may disappear without treatment, and the person may never have another outbreak of psoriasis. Some children experience flare-ups for a number of years. It also is possible for the psoriasis to appear later in life as plaque psoriasis. In some cases, guttate psoriasis is severe and disabling, and treatment may require oral medication or injections.

How to recognize guttate psoriasis:

How to recognize localized pustular psoriasis:

This is a rare and severe form of psoriasis that can be life-threatening, especially for older adults. Hospitalization may be required. Generalized pustular psoriasis may be triggered by an infection such as strep throat, suddenly stopping steroids, pregnancy, and taking certain medications such as lithium or systemic cortisone.

How to recognize generalized pustular psoriasis:

Not common, inverse psoriasis also is called “skin-fold,” “flexural,” or “genital” psoriasis. This type of psoriasis can be severe and incapacitating.

How to recognize inverse psoriasis:

Also known as “exfoliative” psoriasis, this is the least common type. It occurs in about 1% or 2% of people who develop psoriasis. Erythrodermic psoriasis can be life-threatening because the skin loses its protective functions. The skin may not be able to safeguard against heat and fluid loss nor prevent harmful bacteria and other substances from entering the body. Patients are usually hospitalized and given intravenous fluids. Body temperature regulation may be required. Erythrodermic psoriasis may occur suddenly in a person who has never had psoriasis or evolve from plaque psoriasis. Triggers include infection, emotional stress, alcoholism, and certain medications such as lithium, anti-malarial drugs, and a strong coal tar preparation. It also may be triggered by excessive use of potent corticosteroids, which is why it is important to use corticosteroids as instructed. Suddenly stopping a psoriasis medication, such as cyclosporine or methotrexate, also can trigger erythrodermic psoriasis.

How to recognize erythrodermic psoriasis:

Is there a cure?

Psoriasis is a chronic disease. While most people with this skin condition are able to maintain a high quality of life there is no cure. Treatment means clearing or alleviating symptoms for a period of time. The key is finding the treatment option that is best for you. There are many choices available for the treatment of psoriasis. Some options are new, their risks and effectiveness unknown. Others are time-tested, proven to be effective, and their safety well established. Phototherapy has long been the option of choice for thousands of physicians and tens of thousands of patients around the globe. Whether used independently or in combination with a complementary agent, such as psoralen used with UVA (know as PUVA), phototherapy is the most trusted option available. 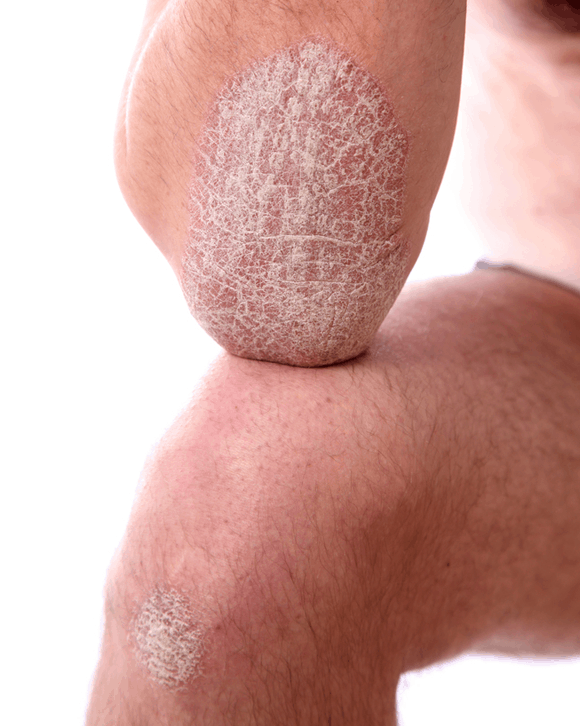 Where can I find more information?

Many of these support organizations can provide additional information about this condition.

What is Psoriasis. National Institute of Arthritis and Musculoskeletal and Skin Diseases. https://www.niams.nih.gov/health-topics/psoriasis. Published May 1, 2003.

Power Output and Why it Matters

The power output of your phototherapy device affects the amount of time it will take you to get your treatment. The concept might be easier
Read More

Integrating Dosimetry and its Importance

Almost all modern phototherapy cabinets in dermatologists’ offices are equipped with a technology called integrating dosimetry. This same technology is now an option on Daavlin
Read More

Eczema or atopic dermatitis is an allergic disease believed to be hereditary and often runs in families whose members also have asthma. An itchy rash is particularly
Read More

CALL 1-800-DAAVLIN OR
FILL OUT THE FORM BELOW